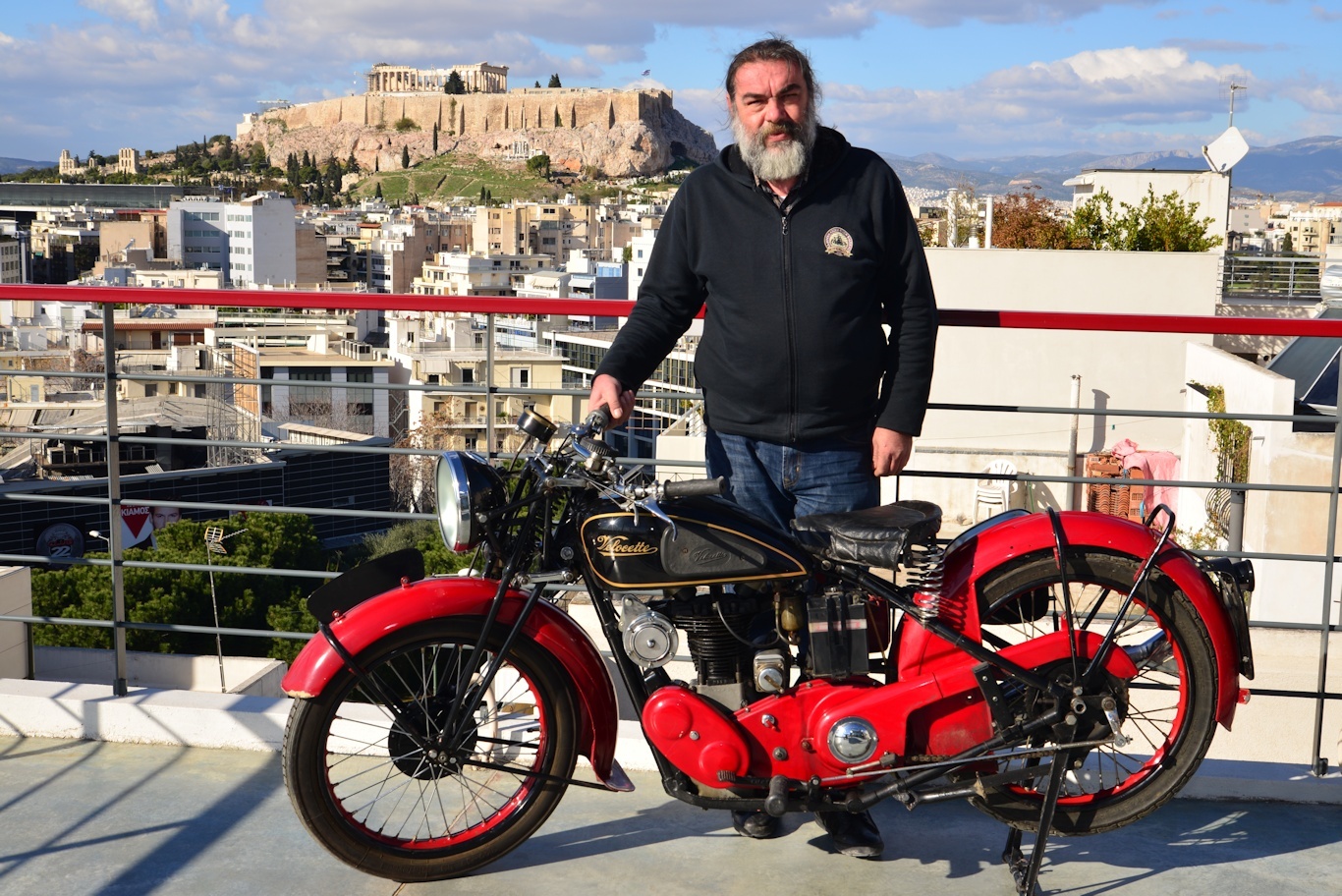 It all began sometime during the 80s ...

Since I was a kid, I used to marvel at everything around me, older than me; cars, motorcycles, buildings, weighing scales, fans ... I would go into my fathers Chevrolet and would be enchanted. I used to gaze at pictures of his older cars all the time. I used to collect 'cards' and knew then every model of every car maker in the world!

Much later, during the time I was studying architecture in Rome, I bought my first car in Greece; a Mercedes 170S, wow! I went on to buy more cars. And it was about then that I used to hang with my carpenter friend Yiannis, marveling at him on his shiny Horex.
– Do you fancy take her for a ride?
– Yes! I rode that bike and instantly fell in love.
– You want it?
– Yes! How much?
That bike stole my heart. A Horex Regina 400. In the corner garage I was offered a '57 Matchless G 80 S. I bought that as well.
My life time adventure was just starting ...

I started looking around. Anything and everything that clicked to me, I bought.
At the same time, I started reading and learning all I could. From my room I used to watch the 'coal man' selling butane gas canisters in his BMW R12 based tricycle.

Two years later and after constantly bragging, I bought it − I had fallen in love, again. My bike collection began to grow and with this, my idea of a suitable place to house and display them began to take shape. I tried to get state support, but this led to nothing. In the end, I decided to house them where I live, build a home for me and a home for them.
And here we are!

Every single motorcycle presented here has a special place in my heart. Machines of drudgery, machines that fought a war, machines which served our country, machines full of innovations. Machines which were raced, machines which took their riders around the world.
With time, I was becoming more and more excited by ever older motorcycles. In my pursue I was also collecting and studying every piece of useful information I could get my hands on. I got deeply involved with our Club, (Hellenic Classic Motorcycle Club), where I met with, and made many new friends, all similar minded folks.
Similar minded folks, lovers of all types of special vehicles I also met in EO FILPA (Hellenic Federation of Antique Cars and Motorcycles). And it was from there that the road opened for me for FIVA (Fédération Internationale des Véhicules Anciens) where I met friends from abroad, people with passion for the classic motorcycle. Battilani, Thomas, Willy, Palmino, Pascale, Pete, Petja, Juris to name a few.

Gradually the restoring 'standards' of my acquisitions were getting higher and higher. I was researching the field, studying and learning all the time. I still continue to learn something new every single day.

Books. These offer considerable added value for my Collection. For every machine there are service and parts manuals, and a lot more. The condition of my bikes is in relation to their age and the use they had when in service. All bikes however are roadworthy and indeed, battle ready. I ride most of them given the slightest opportunity!

In this web site I would like to present to you my 'labor of love' from so many years ago. I have tried to describe, as best I can, my life since around 1985. In doing so I hope I am successful at conveying to you some of my 'passion'.

Interested? Hop up and enjoy surfing the site. Stay in touch!